Save Your Company, Save Your Job: Crisis Management in the Internet Age.​ 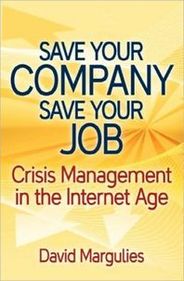 David Margulies has been at the forefront of some of the major issues facing businesses, government agencies, and nonprofits since founding the Margulies Communications Group in 1986.

He was the spokesperson and managed worldwide media relations when Oprah Winfrey was sued by Texas cattle interests. He has also managed media relations for a number of other high-profile cases, including litigation by Anna Nicole Smith against his clients, the heirs to the estate of the late J. Howard Marshall II. David and his team of professionals at The Margulies Communications Group also help clients build their businesses with positive media stories, innovative marketing programs, community involvement and cause marketing.

Margulies is a frequent commentator on high-profile issues on programs including Marketplace, the Today Show, CNN, CNNfn, the O'Reilly Factor, Fox News, Fox & Friends, E! Entertainment, and Your World with Neil Cavuto and has been quoted as an expert in public relations and crisis management in Business Week, the Wall Street Journal, and many other publications. Prior to entering the public relations field, Margulies covered the Middle East for NBC News.

David's coverage of the Lebanese civil war, while under fire, can still be found on YouTube. He has also worked as an award-winning investigative reporter and news anchor at stations in Dallas, San Antonio, and Buffalo.

A native of New York, David Margulies is a graduate of the University of Missouri Graduate School of Journalism with an undergraduate degree from Southern Illinois University. He and his wife, Kathy, live in Dallas. Their two sons are currently college students.​